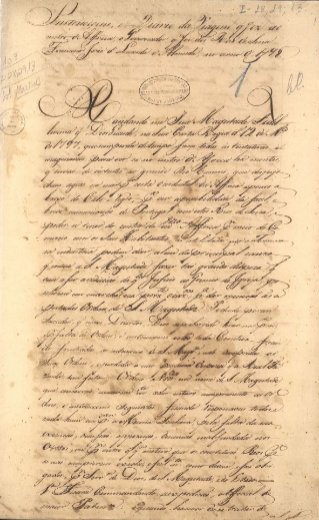 This manuscript diary by the Brazilian mathematician, geographer, and explorer Francisco José de Lacerda e Almeida (1750-98) describes Almeida’s journey into the interior of southern Africa in 1798. Almeida was born in Brazil, studied at the University of Coimbra in Portugal, and rose to the position of royal astronomer. In 1780, he returned to Brazil as part of a commission established to determine the borders between Spanish and Portuguese territories in South America under the recently concluded Treaty of San Ildefonso (1777). He spent ten years in Brazil, where he discovered new species of plants and animals, along with Indian tribes previously unknown to Europeans. Following his return to Portugal, he published a journal describing his travels. In 1797, he began planning a new journey, to the interior of Africa, in hopes of establishing a trade route between Portuguese holdings in Angola and Mozambique. He died in 1798, shortly after arriving in the capital of the Kazembe kingdom (in present-day Zambia), where he planned to begin negotiations with the king on a trade route. The chaplain on the trip took custody of Almeida’s diary of the journey, which later was published in Portugal by Almeida’s nephew.